Will the World Congress 2020 be your first time in Toronto?

Don’t worry – we have you covered when it comes to getting around one the most dynamic cities in the host country, Canada.

Toronto, capital city of the province of Ontario, is the largest city in Canada, with 2.7 million residents! That number goes up to nearly 6 million people when you include the rest of the Greater Toronto Area, which is the name given to Toronto and its neighbouring regional municipalities.

No matter where you come from, you’re sure to feel at home as Toronto is one of the most diverse cities in the world, with more than 50% of residents identifying as a visible minority population groups. While English is spoken across the city, more than 160 languages can be heard across the many neighbourhoods.

The currency is the Canadian dollar. For denominations under five dollars, Canadians use coins, including what are affectionately known as the “Loonie” (one-dollar coin) and “Toonie” (two-dollar coin). Daily currency exchange rates appear in newspapers and online, and are posted at banks throughout the city.

The Harmonized Sales Tax (HST) is a 13% tax that is applied to most purchases of taxable supplies of goods and services in the Province of Ontario.

If you’re happy with the service you receive, a 15-20% tip on the pre-tax bill is a standard expression of appreciation.

Toronto offers many options when it comes to commuting. If you’re in a hurry, a reliable series of taxi companies and ride sharing apps have vehicles across the city. However, don’t be afraid to try the TTC, or Toronto Transit Commission. 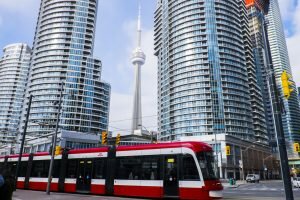 This system includes buses, streetcars and subways and offer a fast network that spreads through Toronto.  The TTC is the most heavily used system in Canada and the third largest in North America, after New York and Mexico City!

If you’re in the mood for exploring (and the weather permits), you can also rent a bicycle for a short period of time from one of the many Bike Share Toronto stops. You can return the bike at any of the 360 stations that are available citywide.

Walking is another great option when getting to know Toronto. Make sure to follow signage and don’t be afraid to reach out to strangers if you’re lost. Canadians are happy to help!

This 553-metre tower is a must-visit landmark when it comes to Toronto. It’s a signature icon of Toronto’s skyline and is visited by more than two million international visitors each year. Heading up the tower averages about $40 and is an unforgettable experience for tourists visiting the city. 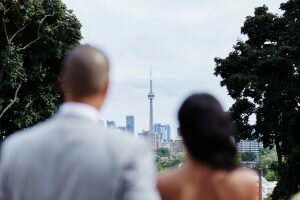 Did you know that there’s a castle in Toronto? Well, it’s more specifically known as Gothic Revival-style mansion but the beautiful piece of architecture has been the main set for many movies and television shows including X-Men, Scott Pilgrim vs The World, The Tuxedo, Chicago, Strage Brew, The Pacifier and more! Built at the beginning of the twentieth century, the property is easily accessible via subway. 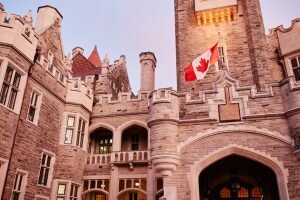 This vast municipal park in Toronto spans more than 400 acres and is a mixed recreational and natural park. High Park was opened back in 1876 and has since been the largest park entirely in the city. If you stop by make sure to visit the many points of interest including the Colborne Lodge museum, the amphitheatre and the zoo! That’s right. There’s even a small zoo in the park. 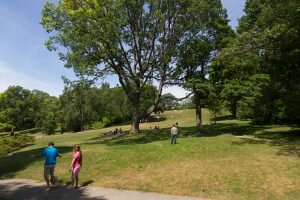 This colorful neighborhood is located in downtown Toronto between Spadina and Bathurst. It has been designated a National historic Site of Canada. Kensington is perfect for a walk as the narrow streets tend to keep away all but the most determined of drivers. Additionally,  art pieces like The Garden Car decorate the streets. The market is also hope to many food stores including bakers, spice stores and cheese shops. Recently the neighbourhood has seen an explosion of cafes, restaurants and even some clubs. It’s truly one of Toronto’s hidden treasures. 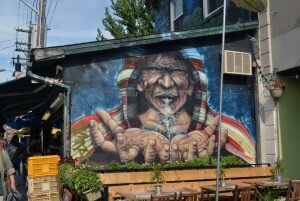 Provide your contact details below to receive updates and announcements about the XXII World Congress on Safety and Health at Work.